A Decade of Progress to #EndHunger

In 2007 and 2008 food shortages sent shockwaves around the world, resulting in some of the sharpest spikes in food prices ever recorded. Costs of staples, such as wheat, rice, and maize, reached levels not seen for generations, exacerbating hunger and malnutrition in vulnerable areas and pushing the number of hungry people to more than 1 billion.

The food price crisis was a watershed moment for global food security. 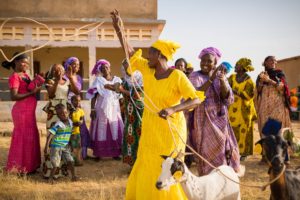 Photo by Clement Tardif, Feed the Future Senegal — Yaajeende
The international community rallied together to tap into the transformative power of agriculture.

The U.S. contribution to this global effort came to be known as Feed the Future, an initiative that brings together a host of partners in pursuit of a common goal: to end global hunger, poverty and malnutrition.

In the time since, Feed the Future has made valuable contributions to global food security.

Click play to learn about Feed the Future’s impact to date.

Feed the Future brings the best America has to offer to bear to fight global hunger.

A decade later, we reflect on progress made and what we have learned about what it will take to sustainably reduce global hunger, poverty and malnutrition in the decade ahead. The world has changed since the food price spikes of 2007 and 2008, and Feed the Future is changing with it.

Our work over the past decade has taught us that progress against hunger and poverty is possible. We are adjusting so that, in the decade to come, we are prepared to meet more dynamic challenges and secure a future free from hunger.

Over the last decade, Feed the Future has built a powerful and diverse coalition of partners to fight global hunger. Check out the stories below to learn more about our various partners and how we are achieving more together.

Feed the Future is empowering communities around the world with the tools and resources they need to tackle the root causes of hunger and poverty and meet future challenges. Tell us how your efforts are building on a decade of progress in food security to end hunger. Use the hashtag #EndHunger to join the conversation online.