As You Sip Your Cup of Coffee, Remember the Smallholders

It’s not an official holiday, but we plan to celebrate it anyway. Four years ago, a group of brilliant men and women got together and decided to proclaim September 29 International Coffee Day (and October 1st is International Coffee Day)! As you sip your cup today, remember the smallholder farmers in Colombia and the Democratic Republic of Congo. They may have made your caffeine break of the day possible. Also remember that, as we empower them, we are making possible democracy, fair trade, sustainability, and the advancement of women around the world.

In all seriousness, this fun holiday was actually created to support those very goals. Around the same time this holiday was put on the calendar, Feed the Future, the U.S. Government’s global hunger and food security initiative, was teaming up with Starbucks to support young farmers in Colombia, and with organizations like Tetra Tech to boost coffee production in the Democratic Republic of the Congo.

That’s because both of these large coffee-producing nations have suffered from intense, decades-long conflicts, severely compromising security and economic interests.

From 2017 to June 2018, U.S. Agency for International Development and Starbucks teamed up in Colombia to provide 21,000 smallholder farmers in former conflict areas with technology and training to produce more and better coffee harvests. Half of these farmers participated in Starbucks’ supply chain, which earned them premium pay for their crops. It was all part of the Colombia Coffee Yield Improvement Project, which helped Colombians in coffee-growing areas access water treatment systems, reforestation and mentorship.

On the other side of the world, the Democratic Republic of Congo has fertile soil, mineral resources and hydroelectric power potential. Yet it suffers from intense food security issues and high mortality rates. To turn this around, Feed the Future partners with Tetra Tech, a consulting and engineering firm dedicated to international development, resource management and many other pursuits. Together, we have worked with Congolese farmers to help them increase the quality their crop, boost production and improve marketing.

Their efforts are working. The Congolese decided to celebrate with a three-day event in June, called Saveur du Kivu. The annual event celebrates the reemergence of coffee in their country and promotes economic growth by hosting representatives from grower organizations, government, international NGOs, and buyers, all of whom get to participate in taste testing competitions.

BRINGING THE BENEFITS BACK HOME

While we take a look at the work that Feed the Future is doing abroad to empower some of the world’s 25 million smallholder coffee farmers, it is also important to look back at the U.S. coffee industry. This is an industry that is is almost entirely dependent on overseas production, yet is responsible for nearly 1.7 million American jobs and $225 billion of our nation’s Gross Domestic Product. By investing in efforts that help smallholder coffee producers in Africa, Latin America and the Caribbean, and Asia boost their productivity and incomes, we are transforming lives and supporting thousands of U.S. jobs in the process.

These efforts are taking place in coffee-producing countries all over the world, not just the Colombia and the Democratic Republic of the Congo. For more information on how Feed the Future empowers coffee producers around the world and supports coffee sector jobs in the United States, check out our coffee fact sheet.

Compost Solutions for Coffee in the Peruvian Amazon

This article in brief:  Coffee farmers in the San Martin region of Peru struggled with increasing production yields due to poor soil management and outdated agricultural practices.  To address&nbspthese… 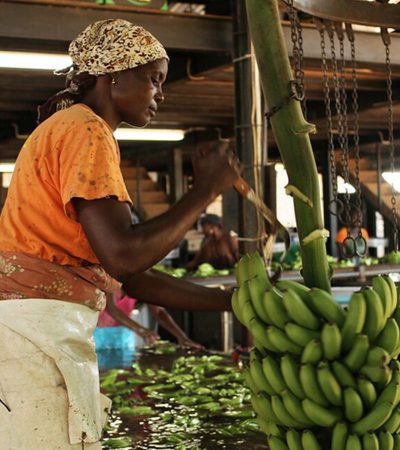 Wake Up to Coffee’s Impact on Rural Livelihoods

By Feed the Future Food Security Partnerships Specialist Can’t function without your morning cup o’ joe? If so, you’re like a lot of us. Yet most of us rarely&nbspconsider…