By Ã‰mer Hickey and Sophie Healy-Thow

What did you spend your free time doing when you were a teenager? Most of us can’t say we were dedicating ourselves to solving some of the world’s greatest challenges, but that’s just what Ciara Judge, Émer Hickey and Sophie Healy-Thow – all 17 years old – set out to do when they entered the 2014 Google Science Fair with a cutting-edge approach to tackling global hunger through better agricultural productivity.

Their project, which won the grand prize among a field of 18 finalists, found that a naturally occurring strain of bacteria can prevent seeds from rotting in the soil before they have a chance to grow, a problem that is particularly prevalent in damp climates. In their experiment, seeds treated with the bacteria germinated about 50 percent faster, resulting in a 74 percent increase in cereal crop yields.

This month, Feed the Future interviewed Ciara, Émer and Sophie to learn more about why food security matters to them.

What led you to become interested in agriculture and food security, and how did you come up with the idea for your Google Science Fair project?

Émer: We came up with the project idea when I was gardening with my mom, and we pulled up these pea plants. On the roots, there were these nodules. Honestly, we aren’t that into gardening and I’m embarrassed to admit I thought something was wrong!

Sophie: Émer had no idea what these wart-like nodules were, so she came to me in biology class and we asked our teacher about them. We were told that there is a type of bacteria naturally found in the soil called rhizobium that forms a symbiotic relationship with legume plants (peas and beans). [Note: The nodules form when plants harbor nitrogen-fixing bacteria like rhizobium in their roots.]

Ciara: I have had an interest in science since I was a child, particularly in using it to make a difference. When we found out aboutrhizobium, my first reaction was to ask how it could be used to help people.

Émer: A few days later in geography class, we were learning about the about the [2011-2012] food crisis in the Horn of Africa. And this class got us thinking, why don’t we try to use science to help?

Sophie: We learned that over 800 million people go to bed hungry every night and most of them are small-scale farmers who are working the land every day for their food.

Ciara: Because there was a great famine in our own country’s history, we empathized with those who were affected. With this in mind, we decided to see if rhizobium could aid the growth of cereal crops.

Sophie: We carried out some research and found that nobody had ever experimented with rhizobium in the germination stage of non-legume plants. As crops like barley, wheat and oats are a very big part of people’s diets and they are farmed all over the world, we decided to use rhizobium carry out experiments on these crops.

In your project, you used bacteria to help seeds germinate more quickly. Is this a technology that farmers can use in their day-to-day operations to grow more food?

Ciara: After conducting extensive experiments, we found that we could use rhizobium to increase the germination rate of cereal seeds by 50 percent on average. Our method to produce this result was actually quite simple: the seeds were inoculated with aqueous bacterial culture before planting, which is an easily replicable technique.

Sophie: If the process were to be commercialized, seeds could be given to farmers pre-treated with the bacteria, which also makes the crops longer and heavier compared to untreated seeds.

Ciara: This has great potential all over the world – particularly for those farming in adverse weather conditions – to help reduce the number of seeds lost before germination and therefore increase farmers’ profit margins. When a seed lies dormant (i.e. not germinated) in the soil, it is at its most vulnerable and is susceptible to rot.

Émer: I think, with further work, our research could be of great benefit in people’s lives. We hope, too, that others can build on our research so that fewer fertilizers would be needed by farmers, which would be great for both the farmers and the environment. 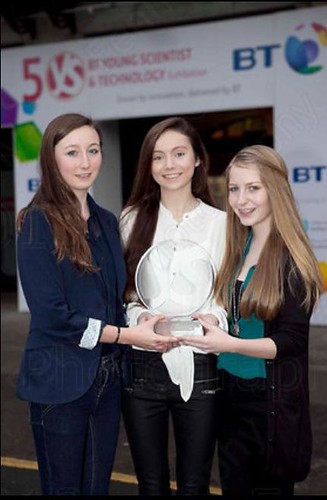 How do you think your project can have an impact on the more than 800 million people around the world who still face hunger every day?

Émer: In our research, we not only decreased germination time, but in some cases increased the dry mass yield of cereals by 70 percent. This has massive implications for crop production not only in Ireland, where we live, but all over the world.

Sophie: I would hope that [faster seed germination] might result in a second crop being produced where only one is currently being produced.

Ciara: We hope that by demonstrating the potential to increase crop productivity, our experiment can help to meet the food needs of a growing population. Also, producing more plants per unit area due to reduced seed loss could help mitigate the loss of agricultural land as a result of population growth.

What’s next for the three of you? Do you want to continue building on the success of this project, or explore new opportunities in science?

Ciara: We started this project together when we were quite young, and naturally as we have grown our individual interests in science have matured, so we will pursue separate areas of research in the future. An area I am personally interested in is the biochemical mechanism behind our results, which is completely unexplored. This research is a necessary step before our findings can be commercialized, so I look forward to beginning this in the next year. [Note: You can follow Ciara’s work on this project and many others through her blog.]

Sophie: For the moment I’m concentrating on my studies, as I have big exams coming up next year in school. In time, I’d like to follow up on the project and look at the prospect of commercializing our product. I am currently following up on a different aspect of the project related to what is happening inside the treated seeds, which will hopefully shed light on why exactly we have been getting such positive results.

Émer: It’s always good to take a break from a long project in order to come up with new ideas. I’m really looking forward to working on the project again in upcoming months, and the chemistry side of it is going to be very exciting! And of course, I want to explore all areas of science, as I have a firm believer they are all interconnected.

One of the things we’re working on at Feed the Future is building the next generation of leaders in food security, so your project is very inspirational to us! What advice do you have for today’s global leaders to help more young people like yourselves get involved in the fight against hunger?

Sophie: I think a lot of young people aren’t even aware of global hunger and that food is wasted every day. In the western world, many people take food and the production of food for granted and don’t think about where it comes from. I believe that governments should put in place programs in schools to raise awareness about global food insecurity. As social media is such a big part of young people’s lives, another way to educate young people on food security would be through social media sites and short video clips. It’s also important to listen to young people. We do have something to say, we do have good ideas, and we are worth listening to.

Ciara: Hunger is a global issue, and so the fight against hunger must become a global movement. Governments can help inform young people about the issue so that they will feel compelled to act. A lot of this has to do with social conscience: young people [in developed countries] should look close to home, where food is wasted and consumed in excess every day, and then look more distantly to those who are struggling to survive from one day to the next. If world leaders encourage people young and old to do this, and lead by example themselves, people will begin to take food security more seriously.

Émer: My advice for global leaders would be to encourage young people to be passionate, inquisitive and willing to take a risk. Trying to make a difference in the fight against hunger can be quite daunting. You think, “I could never do that.” We need global leaders and those around us to encourage us positively, listen to ideas no matter how crazy they may seem, and encourage us. Let us make mistakes and allow us to be actively involved, because when given the opportunity, everyone can make a difference.

Check out a video on Ciara, Émer and Sophie’s project or find out how to submit your own to the 2015 Google Science Fair, which opens for submissions in February!

The contents of this guest blog do not necessarily reflect the views of the U.S. Government.