Preparing for and serving in the Peace Corps was a journey I could not have completely prepared for. My decision to serve stemmed from my desire to utilize the skills I had acquired in agriculture and resource economics and animal science at Tuskegee University by assisting individuals to reach personal sustainability in lower-income countries.

Unaware of what I was getting myself into but excited about the opportunity to serve, I accepted my invite to serve in Malawi as soon as it arrived. I wasn’t exactly sure where on the map Malawi was (knowing only that it was located somewhere in Africa), but I knew this opportunity closely related to my personal and professional interests.

I arrived in Malawi during rainy season and instantly fell in love. The temperature was warm, the land was lush and green, and the people were welcoming and loving. I learned that I would be placed in Kasungu National Park and subsequently dreamed of animals and paradise, a beautiful landscape with lush surroundings. I imagined befriending one of the elephants and using her as my means of transportation.

This is what I envisioned… 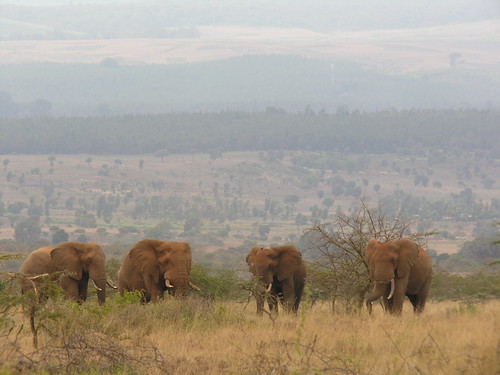 Photo by Patrick Chiyo/Duke University (courtesy of the U.S. Fish and Wildlife Service)

But this is what I actually saw…

A wildlife park with no wildlife!

When most people think of poaching, they see it as a way to sell parts of the animal across borders (for example, ivory from elephants). But that was not the case here: My community saw poaching as a way to survive.

After speaking to my community and learning more about the challenges they faced, I knew there had to be a better solution to address protein deficiencies. How could more protein-rich, balanced meals be provided to decrease malnutrition? I reflected back, drawing from my extensive knowledge of goats and experience working at the Caprine Research Center (a goat research farm) while I was an undergraduate, as I searched for an answer.

I knew there had to be a better solution to address protein deficiencies.

In graduate school, while researching my thesis “Economics of Goat Meat Raising in the Alabama Black Belt Counties,” I had focused on goat farmers living in an area with extreme poverty very similar to Africa. I was aware of all the amazing properties of goats and how they could help low-income individuals. For example, goat’s milk is close to a woman’s breast milk and can serve as a milk replacement, helping increase survival rates of babies born to mothers infected with HIV/AIDS. Not only that, but goats also have the leanest and healthiest red meat for consumption.

Thinking of all the benefits of goats, I proposed the idea of raising them to my community to determine its level of interest. Once members expressed interest, we had to figure out how to bring the goats to them.

During my graduate studies, I had learned about an organization called Heifer International. It has an amazing “pass-on” program that I wanted to emulate, but I did not have much time and wanted to reach as many people as possible in my two years of Peace Corps service. I wrote (and received) a President’s Emergency Plan for AIDS Relief (PEPFAR) grant for $10,000, through Peace Corps Malawi, to implement the project.

During the week-long training, participants received information on goat production, management and sales. After the training, they returned home to build secure housing for their goats as their contribution. They each received five female local-breed goats, delivered by breeders in southern Malawi, for a total of 80 female goats across the 16 participants. We also purchased two male South African Boer goats from a local Malawian non-profit, Small Scale Livestock and Livelihoods Program, for breeding purposes. South African Boer goats have a high muscle mass (more meat) and higher production rate (twins and triplets). Breeding them with local Malawian female goats produces offspring with these desirable genetic traits. After the offspring were old enough to live without their mothers, five females were passed on to the next person in line for the pass on, and the process continued.

I left Malawi in April 2011. Over the past six months, I have been in contact with my Malawian counterpart, Chegwenyu, and he informed me that the program is still going. Initially, we started with 500 individuals that we estimated would expand to 2,500. To my surprise, that number had been surpassed and Chegwenyu believes that there will be an impact double or even triple the amount originally projected!

The fact that my community, Chulu Village, now has access to more protein-rich, balanced meals every day has solidified my belief that goats can be used to create a better quality of life for those in lower-income communities around the world. And, as an added benefit, it means wildlife in the village can remain where it belongs: in the wild at the local national park.

Déme is an early success of the Agriculture Development Project, part of Burkina Faso’s $480.9 million compact with MCC, which focuses in part on helping livestock producers practice techniques that aim to increase value through improved animal husbandry&nbsptechniques.

Where past breeding programs failed because they were too centralized and focused on imported breeds of goats, AGIN aims instead to support participatory, community-based breeding programs engaging local farmers and other professionals in selecting which genetic traits in goats are important to their community.

Recognizing the critical role that livestock plays in the food security and economies of developing countries, Feed the Future is helping pastoralists adapt to climate change while building the capacity of partner institutions in these countries to support local pastoral&nbspcommunities.

Using Data to Change the World One Goat at a Time

USDA scientist Tad Sonstegard’s comparison of the World Food Programme’s “Hunger Map” to the Food and Agriculture Organization’s goat census statistics, reveals that 90 percent of all goats in the world are located in main ‘hunger zones’ of Sub-Saharan Africa and South Asia. What’s the connection?