In countries where the vast majority of the rural poor depend on agriculture for their livelihoods, the effects of climate change are often most immediately felt and can be devastating. Central Asia is no exception: more extreme temperatures, erratic precipitation, more frequent droughts and other threats are all becoming increasingly common experiences among smallholder farmers, yet local awareness and action on climate change in the region has lagged behind. From wheat farming to water management, the U.S. Government is supporting climate smart agriculture and the sustainable use of natural resources in the Central Asian Republics to help ensure that farmers will be able to feed their families for a long time to come. 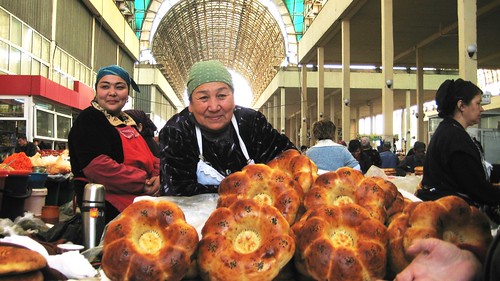 Selling food at a marketplace in Tajikistan, where bread accounts for half of people’s daily calories on average. Photo by USAID.

Bread, the lifeblood of the Central Asian diet, provides 50 percent or more of average daily caloric intake in Tajikistan. Much of the wheat consumed in Tajikistan is imported from Kazakhstan. A regional wheat resiliency project, funded through the Global Climate Change Initiative, is currently testing drought-resistant varieties of wheat, different sowing times and soil tilling techniques in Tajikistan to help smallholder farmers overcome challenges to production. 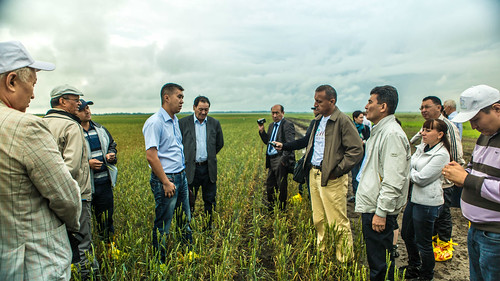 As weather becomes more unpredictable and extreme in Kazakhstan’s wheat regions, climate information services that enable farmers, processors and policymakers to take proactive measures are essential to lessen the negative impacts of this increasing variability.

Last year, a new climate change mitigation program managed by the U.S. Agency for International Development (USAID) was also launched to help Kazakhstan achieve long-term sustained reductions in greenhouse gas emissions intensity. In addition to working closely with the private sector and Government of Kazakhstan to implement smart policies, the program is providing specialized training to help build the next generation of climate and energy professionals in Kazakhstan. 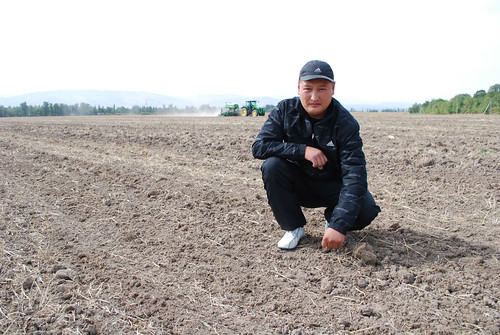 With USAID assistance, Kanybek Imankulov, a father of four in Kyrgyzstan, applied environmentally friendly no-till technology to his land using modern agricultural machinery. He says this change has increased his income and improved the living standards of his family. Photo by IFDC.

Scaling up agricultural technologies to smallholder farmers in a sustainable way means utilizing approaches that will conserve natural land and water resources. That’s why Feed the Future promotes improved agricultural management practices like no-till technology, which preserves land from mechanical erosion, enhances soil quality, reduces the use of fertilizer and increases water infiltration into the soil. The practice is good for farmers as well as for the soil, as it increases crop productivity and considerably reduces farmer expenditures for fuel, planting and other field operations. 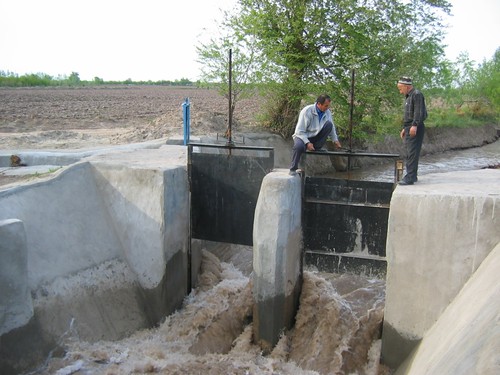 Water scarcity is one of the most pressing development challenges of the early 21st century, and more than 70 percent of global water use occurs in the food value chain. As the world population continues to grow, agriculture will need to use water more efficiently to feed nine billion people by 2050.

In landlocked Tajikistan, rainfall is very limited and more than two thirds of the country’s arable land requires irrigation in order to be cultivated by farmers. Efficient irrigation management is one component of broader natural resource conservation and resilience in the face of Tajikistan’s receding glaciers, varied rainfall and reduced snow pack. To help farmers sustainably build and maintain irrigation systems that underpin growth in Tajikistan’s agriculture sector, Feed the Future has helped to establish and support 60 community-based water users associations, groups of farmers who work together to plan how the community will deliver water to its crops. These groups cover over 120,000 hectares of irrigated farm land, where farmers are enjoying better yields and increased incomes.

Watch a video about water access and food security in Tajikistan.