Feed the Future takes a comprehensive approach to global food security, which means working along the entire agricultural value chain: from small-scale farms, to agricultural businesses, to institutions like banks and governments. Under Feed the Future, the U.S. African Development Foundation (USADF) provides grants directly to underserved community enterprises that are poised to improve food security. But to increase the impact of some of these grants, USADF is partnering directly with African governments and leveraging their resources and expertise to make every development dollar go further. 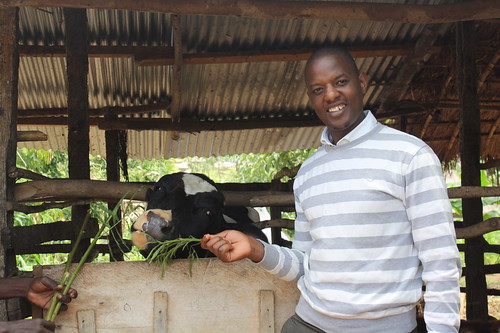 USADF Country Program Coordinator visits grantee Gulu Dairy on a trip with officials from the Government of Uganda. Photo by Jennifer Katchmark/USADF.

In Uganda, USADF has a Memorandum of Understanding with the Government of Uganda’s Ministry of Finance to promote the development of smallholder agricultural producers, small-scale agribusinesses, and small and medium-sized enterprises in marginalized Ugandan communities. Under the agreement, the Government of Uganda matches every dollar USADF invests in a grantee’s project to increase their competitiveness in regional and international markets. 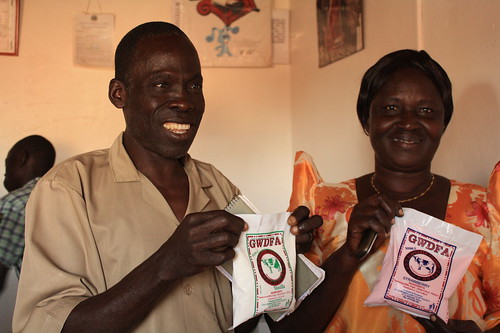 Gulu Community Dairy Farmers Cooperative Society Ltd is one of the organizations that has benefited most from this partnership between the Government of Uganda and USADF. Since receiving a Feed the Future grant in 2010, the 94-member cooperative in northern Uganda has streamlined their milk and yogurt production and processing tremendously, doubling many of their performance indicators: net income from sales has increased by 221 percent and purchases from local smallholder farmers have increased by 151 percent. Before receiving their grant, Gulu sourced their raw milk from 150 local farmers; today, the cooperative directly benefits up to 212 farming families per year. 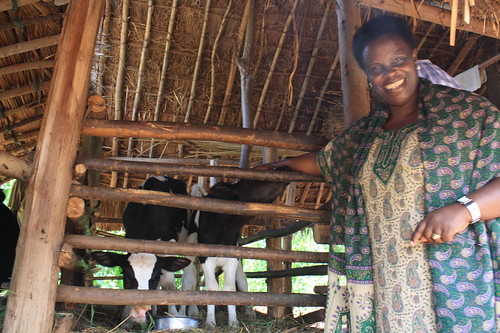 A member of the Gulu Dairy Farmers Cooperative stands in front of a new heifer the group was able to acquire after receiving a grant. Photo by Jennifer Katchmark/USADF.

Gulu Dairy’s numbers were so staggering that the Government of Uganda’s Dairy Development Authority recognized them with the Second Best Primary Dairy Gold Award of 2014. The group’s success has allowed it to give back to the community, donating fresh milk and yogurt to the local hospital and primary school to help encourage parents to include dairy in their children’s diet for growth and nutrition. 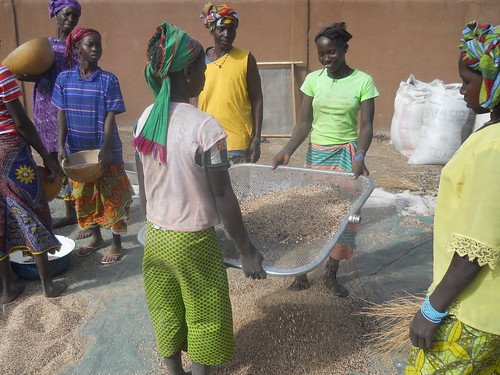 Members of the Maize Producers’ Union in Mali process cereal grains such as corn, millet and sorghum. Half of the Union’s 1,900 members are women. Photo by Christine Fowles/USADF.

In Mali, a Feed the Future grant from USADF gave the Maize Producers’ Union of Cooperative Societies of Diédougou, an alliance of seven cereal grain cooperatives, the credibility to attract investment from notable local financial institutions, including Mali’s Agricultural Development Bank. The bank entrusted the Maize Producers’ Union with a credit line of approximately $204,000 specifically to fulfill orders from buyers such as the World Food Program (WFP). 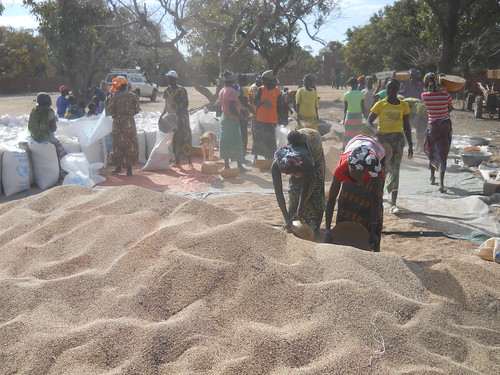 A major contract with the World Food Program enabled the Maize Producers’ Union to repay their bank loan in full and still earn a profit. Local sourcing also helps the WFP keep costs down and help more vulnerable people. Photo by Christine Fowles/USADF.

Previously, the WFP dealt directly with only 11 farmer organizations in Mali to purchase its cereals, but the organization recently agreed to purchase rice, millet and sorghum directly from farmer organizations who receive technical assistance and support from Feed the Future. Thanks to the bank loan the Maize Producers’ Union was able to secure, the members fulfilled a 955-ton cereal contract in the most recent season. They were also able to repay the loan plus interest back to the bank, earning a gross margin of more than $67,000.

Stories like these show how even moderate funding can enable agricultural cooperatives and unions to prove their ability to produce high-quality yields, giving them a better chance to grow and succeed in the market. With backing from African government institutions, this support translates into a win-win for both smallholder farmers and African countries’ economies.

After seeing a food security project in a nearby village, the women of Djalé went to work to improve their own community’s food security and nutrition. Now, their determination is paying off and making Djalé a healthier, happier, and more prosperous place to&nbsplive.

The Proof is in the Pumpkin: Fatuma’s Journey to Entrepreneurial Success

One young Ugandan woman is transforming diets with the high-yielding, nutrient-rich pumpkin. What started with $140and a dream is now the successful agribusiness, Byeffe Foods Ltd., providing an affordable food choice and economic opportunities for other young people across Uganda.

For a husband and wife team in Honduras, starting a small processing business was a labor of love. With Feed the Future’s help, they’re taking their business to the next level and expanding it to nearby communities.