Last week, as global leaders gathered in New York City for the 69th Session of the UN General Assembly, U.S. Government officials helped launch the Global Alliance for Climate Smart Agriculture during the United Nations Climate Summit. Speaking at the Summit, President Obama called climate change the issue that will define the contours of this century more dramatically than any other.

Climate change is a critical challenge for food production around the world, affecting global temperatures, precipitation patterns and oceans. As climate-related threats grow more severe, decisions about where and how food is produced can either accelerate or help put the brake on climate change. Unfortunately, in many countries, those most vulnerable to the impacts of climate change are the least food-secure.

In concert with the U.S. Global Climate Change Initiative, Feed the Future is partnering to meet the challenge of increasing global food production by at least 60 percent by 2050 to feed a growing population while sustainably managing natural resources and adapting to a changing climate. 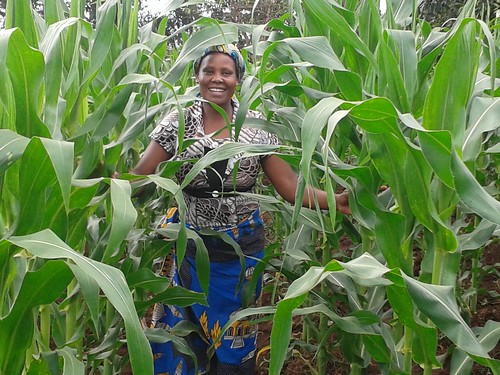 Mrs. Muthira, a smallholder maize farmer in Kenya, proudly shows off her crops at her farm in Migori Country. A Feed the Future partnership with Kenya Agriculture Value Chain Enterprises and the African Agricultural Technology Foundation has been testing the effectiveness of water-efficient maize in Kenya. While Kenya’s semi-arid region receives unreliable rainfall, improved varieties of water-efficient maize have the potential to improve yields and equip farmers to withstand increasingly frequent droughts. Photo by USAID. 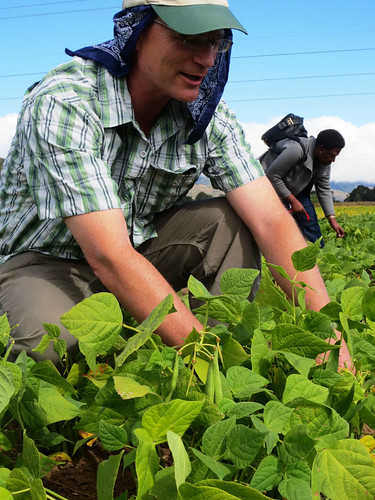 Under Feed the Future, scientists from the U.S. Department of Agriculture (USDA) are researching abiotic stress – i.e. stress from sources other than pests or diseases – which can be caused by climate change and is damaging to crops.

At USDA Agricultural Research Service hubs in Puerto Rico and Washington State, scientists are evaluating bean plants for heat stress and drought response. The Feed the Future Innovation Lab for Climate-Resilient Beans, based at Pennsylvania State University, is also investigating drought tolerance of beans in Mozambique. As scientists determine which bean populations are most promising, they will select and breed them in Africa during the coming growing season. This process of selecting for abiotic stress tolerance in bean populations is already underway in Honduras. Photo by USDA. 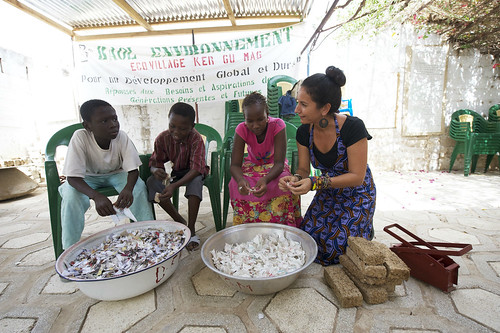 In Senegal, Peace Corps Volunteer April Muniz works with youth in her community to make briquettes out of waste paper, peanut shells, sawdust and water. These briquettes are more sustainable and have a lighter environmental footprint compared to traditional charcoal, gas and wood sources of cooking fuel. The cost of making a single brick is little more than a few cents, and each one burns long enough to prepare a local meal of rice and fish. Photo by Peace Corps. 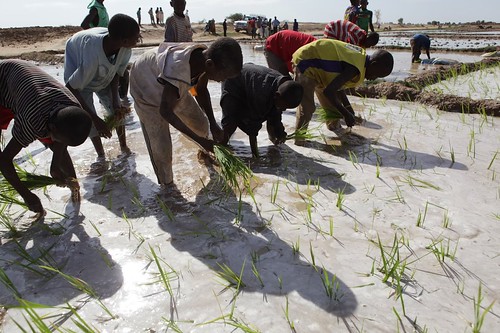 Young farmers plant rice in Mali, where changes in rainfall and temperatures are challenging the resilience of farming systems. The United States is supporting the Government of Mali’s efforts to advance understanding of the impacts of climate change: this month, USAID hosted an event in Bamako attended by Mali’s Secretary General of the Ministry of the Environment as well as more than 50 other participants from government, NGOs, research institutions and the private sector. The workshop analyzed how climate change will impact water resources, crop productivity, pests and diseases, farming methods and other aspects of agriculture and food security in Mali. Photo by Devan Wardwell/Abt Associates. 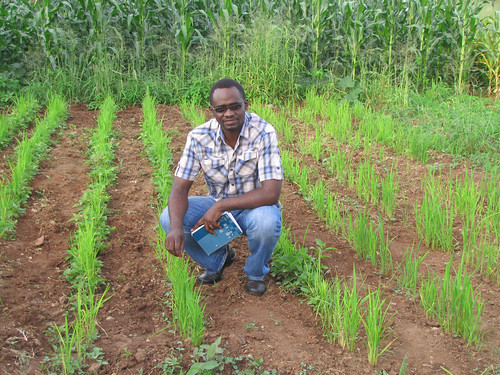 A researcher examines a rice variety trial in Zambia. With support from Feed the Future, a team of researchers from Michigan State University, Kenya and Zambia are linking computer models of climate change to investigate how crop production and household food security are being affected and how agronomic practices may reduce smallholder farmers’ vulnerability. Strategies like using several smaller doses of fertilizer, planting earlier-maturing seed varieties and switching crops can help reduce the negative effects of rainfall variability and shorter rainy seasons to provide better and more regular harvests. Photo by Jenny Olson/MSU. 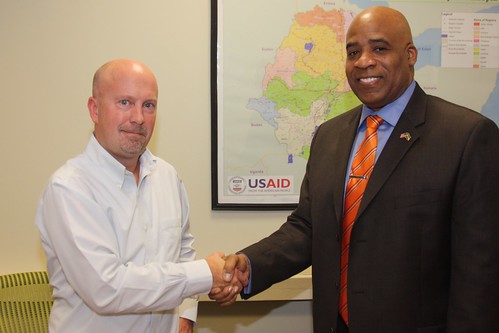 In Ethiopia, Matthew Davis of Catholic Relief Services (left) and Anthony Amerson of USAID (right) formalize a grant for a new climate resilience project under Feed the Future and the Global Climate Change initiative, with additional funding from USAID’s Office of Foreign Disaster Assistance. The project will build community resilience to climate-related shocks and disasters in six of Ethiopia’s most vulnerable districts while improving long-term capacity to adapt to climate change in drought-prone areas. A similar agreement recently signed with Project Concern International brings the total of these two grants close to $12 million. Credit: USAID/Ethiopia.
Learn more about Feed the Future’s work on climate change and food security.

From Cambodia to Mozambique, farmers are increasingly turning to conservation agriculture techniques like minimum tillage to bolster climate resilience and increase productivity. Dany Mert was getting tired. Tilling her&nbspmodest…

Biodigesters leverage a natural process to transform raw manure into organic fertilizer and biogas, while also curbing methane emissions. Despite facing many obstacles, Bangladesh has risen rapidly to become&nbspone…

Without Public-Private Partnerships, Your Morning Cup of Coffee Might Not Exist

The Partnership for Sustainable Coffee supports smallholder farmers around the world by providing access to lending and advisory services. No one knows exactly what sparked the 2012 coffee rust&nbspcrisis…