This article in brief:

Guatemala has the sixth-highest level of chronic malnutrition in the world, and the highest in Latin America and the Caribbean. Maize accounts for 50 percent of the average rural diet, however, it also drives malnutrition rates due to its naturally low levels of protein and key nutrients. High-yielding, nutritious biofortified corn seeds offer a promising solution to improve nutrition and livelihoods for rural farming families.

Nelson Donis is a sales technician with Semilla Nueva, a Guatemalan social enterprise. The farmers he works with often have side jobs, such as being a driver, to support their families in case their primary income from farming suffers due to unpredictable harvest seasons. Donis promotes the sale of Fortaleza 3 – a biofortified maize seed that contains high levels of nutrients needed to reduce chronic malnutrition.

In partnership with the Feed the Future Partnering for Innovation program, Donis and his colleagues are helping farmers achieve stronger harvests by selling more of the biofortified seed in the market. 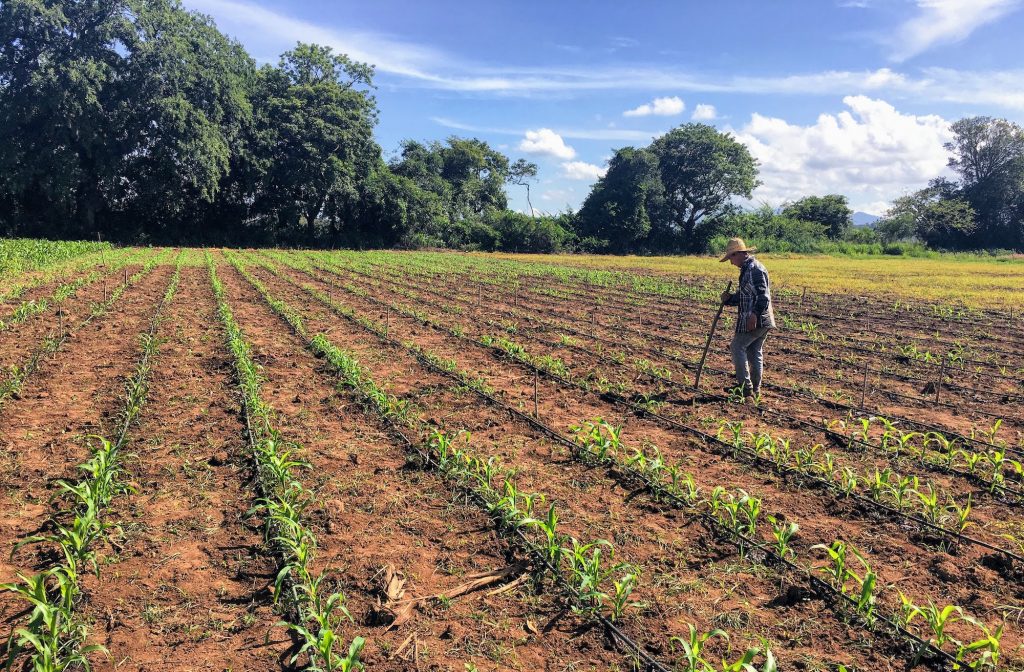 The improved seed increases yields by up to 11 percent more than similarly priced seeds and delivers 2.1 times the protein, 39 percent more zinc and 19 percent more iron than traditional maize varieties –all critical factors in helping to reduce the country’s high rates of malnutrition, including stunting among children. With Feed the Future’s help, Semilla Nueva aims to sell at least 4,000 bags of the biofortified maize seed to farmers across Guatemala by January 2021.

Farmers typically learn about Semilla Nueva’s seed directly through in-person promotion and training, but the presence of COVID-19 in Guatemala forced the company to change its business model. Field staff like Donis are unable to travel to farmer communities, and large gatherings are prohibited. With these restrictions come unique challenges for technicians like Donis and the agrodealers and farmers he serves.

In response, Semilla Nueva developed new ways to connect with farmers. With the help of Feed the Future, Semilla Nueva created a digital marketing campaign to continue driving demand for the improved seed. The company launched WhatsApp, SMS, radio and billboard campaigns – including audio and video messages to overcome literacy barriers – in target markets across the country to continue reaching farmers amid the pandemic. Technology has also enabled technicians like Donis to provide remote support to farmers.

Semilla Nueva has sold 1,500 bags so far under the partnership, which will ultimately provide biofortified maize grain – and through it, improved nutrition – to an estimated 32,000 Guatemalan farmers and consumers.

For Donis, the current circumstances have underscored the importance of competitive yields – and nutrition in face of disease – that the biofortified maize seed provides.

“Many of my customers have lost their secondary jobs as drivers and small shop owners, and with it, their extra income, making them even more dependent on agricultural income and a good harvest this year,” Donis said. “Many of the farmers are interested in growing more maize this year. Even with the loss of secondary income, farmers can afford Fortaleza F3 seed and gain a better chance at improving their incomes.”

Feed the Future Partnering for Innovation, implemented by Fintrac Inc., builds partnerships with agribusinesses to help them sell new products and services to smallholder farmers. Funded by Feed the Future, its goal is to change the landscape for supporting agriculture in emerging market countries by empowering the private sector to raise incomes and reduce hunger.